Like all the cities and district in Rajasthan, Kota also carries a sandy cover and regal charm. Let's know about the geography of the desert town. 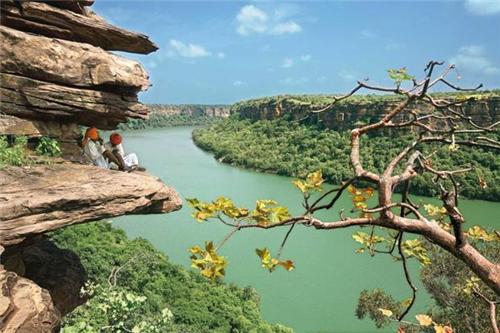 Kota holds third position in terms of land areas in Rajasthan just after Jaipur and Jodhpur.  It encompasses an area of 12,436 km2, which is about 3.63 per cent of the total land area of Rajasthan. It is situated at an average elevation of 271 metres (889 ft) height. The city is located at co-ordinates of 25.18°N 75.83°E.

The district is bound on the North and North West side by Sawai Madhopur, Tonk and Bundi. It is situated at the mid of the southern region of Rajasthan state. It forms the eastern boundary of the Chambal River and is situated along the sloppy region forming the Malwa Plateau. Kota Division is a broader section of Rajasthan state. It is formed by the union of four districts which are Baran, Bundi, Jhalawar, and Kota. It is situated at a distance of 240 kilometres from the state capital, Jaipur.

The soil of Kota is fit for agriculture with better irrigation facility through canals. The city is best known as a trade centre for cereals like wheat, pulses, millet, coriander rice, and oil seeds.

Being located at the edge of the Chambal River, the city is separated from the three sides by the river forming a natural boundary from other land areas. The city has semi-arid climate it receives full suns light throughout the year. Summer starts from end of March and continues till the end of June. The days are long, hot and dry.

From late of October to the end of February winter remains in the region with mild cool atmosphere. Kota receives relatively low winter season as compared to the other region of the India. The temperature in Kota remains between 26.7°C (max) to 12°C (min) in winter season. Winters are mostly dry it hardly receive rainfall during winter season. While due to the Western Disturbance, sometimes in the month of October, Kota receives rainfall. From tourism perspective it is the best time to visit Kota and explore the city.

Kota receives of annual rainfall 660.6 mm. Rainfall in the city is caused mainly due to the southern monsoon  which starts from the last week of June and may last till mid-September. While the pre-monsoon rain begins in the month of mid of June, but the post monsoon month i.e October brings rainfall occasionally in the region.

Explore more about About Kota