The history of Kota tells much about the ancient culture and inheritance of the city. Being an important landmark of the state of Rajasthan in India, Kota has a very enticing past. The city of Kota earlier known as Kotah is situated on the eastern bank of the river Chambal. It is located at a central point of the south-eastern region of Rajasthan in India. Popularly this area is known as Hadaoli or the land of the Hadas. The Hadas are an off shoot of the well known Chauhan clan belonging to the Agnikula or the fire dynasty Rajputs. They initially settled down in the rocky regions of Mewar close to Bijolianat Bambaoda during the 12th century A.D but soon spread their control over Bundi in 1241 and the region of Kota thereafter. 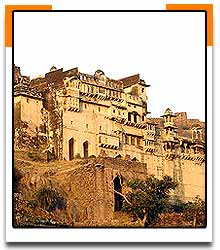 Various Phases of History About Kota

The detailed history of Kota states that the area was ruled by a Chieftain named Rao Deva of the Hada community. Initially Kota formed a part of the Jagir of the Hada state of Bundi. Later it got recognition as a separate state in seventeenth century. A ruler of Bundi carved out Kota as a present for one of his favourite young princes, Rao Madho Singh, for having proven his worth as courageous and a successful general at the tender age of fourteen. In following years, the area of Kota came under the rule of the leader of the Bhil community. Till the initial years of 17th century AD, the region around Kota was ruled by the brave ruler Rao Ratan Singh. In 1631 however Kota was passed on to the hands of Rao Madho Singh, the son of Rao Ratan Singh by the erstwhile Mughal Emperor, Shahjahan. This was the juncture when Kota was transformed into an independent state in Rajasthan of that time. Later, one of the rulers down the line, Maharao Bhim Singh made significant changes in the historic enhancement of Kota by creating Mansabs of five thousand in the region.

The rulers there after fought on behalf of the Mughal emperors. In the war fought by Emperor Shah Jahan, against the rebellious prince Aurangzeb, Rao Madho Singh's five sons lost their lives in the battlefield. The one, who barely escaped, survived with almost fifty wounds wedged on him. Kota has a very complicated history with a lot of twists and turns over the ages. It has faced dangers of attacks over the centuries by different Mughal emperors as well as the rulers of Mewar and Jaipur. Not only that even the Maratha warlords and at times their own neighbour Bundi threatened the existence of Kota. Rulers of Kota over years of experience developed a deep sense of diplomacy.

The Rule of Zalim Singh

During later years Kota saw a great leader in Zalim Singh. He was a diplomat and a statesman and who has often been called the 'Machiavelli of Rajwarra' as well as 'Talleyrand of North India'. Beginning his career as a general with the army of Kota, he became a great name in the kingdom as the then king expired leaving behind an infant son to be placed the throne. Zalim Singh then started his journey by influencing the kingdom’s aggressive neighbourhood enemies by fighting and playing them against each other. He was the one to have entirely reorganized the kingdom, giving it a taste of modern administration. He also adopted the contemporary European war tactics and weapons for its army and also created a systematic revenue system which set a tax for everyone. While bringing these changes he gathered many enemies with in the kingdom. There were several occasions when people attempted to kill him. In one such instance, he was set up by one of the queens who staged an attacked through a group of armed ladies while in purdah palace.

In the year 1817, under the leadership of Zalim Singh, Kota was one of the very first Rajput states to have signed a treaty with the British Raj. In the treaty however Zalim Singh included that a separate kingdom would be carved out of the then existing Kota to be ruled by his descendants. As a result in 1838, the new kingdom of Jalawar came into existence. During the revolt of 1857 it is said that the troops in Kota joined the revolt under the secret help of the ruler. In 1947, during independence Kota a town with its heritage buildings like the palaces and various public buildings, an already existing modern administration as well as good civic amenities.

As over the centuries Kota has been under several influential dynasties of the bygone era the cultural heritage and the social set-up of the city mirrors the rich trail of those times. Starting from the grand palaces, the incredible waterways, the outstanding architecture of the forts Kota has a store of far-fetched historic treasures to offer.

Starting from 12th century AD till date, Kota has walked a long way of eventful ride which has been decorated with series of well noted historic events. The population of Kota has grown gradually with an influx from Punjab and with the growth of innumerable industries locally. Not only does it have historical tales to offer but with passage of precious time, Kota has proved to be a prominent zone for business in the state.