Kota is not only a visual delight to the tourists, but the many ancient forts and palaces here reflect the glorious past of the royal dynasties here. That is why itself, this city is always crowded with domestic and international tourists. There are several different types of tourist places in Kota and Jagmandir Palace is a renowned heritage attraction among them. 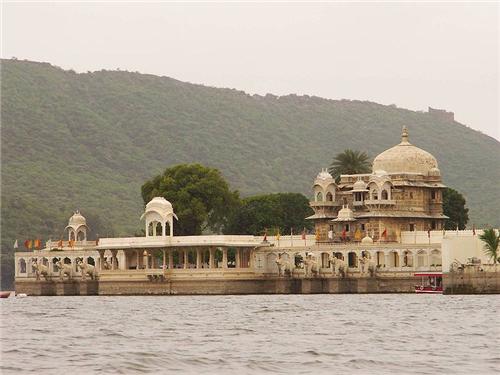 Jagmandir Palace, which is situated in an island in Lake Pinchola, was built by royal dynasty of Mewar in 1740. This palace is named in the honor of Maharana Jagat Singh, the last king of the Mewar dynasty and was used as a summer retreat by the members of the Royal family. Jagmandir Palace is also known as the Lake Garden Palace.

The artificial lake was created by Prince Dher Deh of Bund in 1346 AD, who named it as Kishore Sagar. Jagmandir Palace is living marvel of the engineering and architectural art and skill of the Rajputana era. The three storied Kota Jagmandir Palace has different mahals. You can see four statues of elephants located on either side of the jetty, at the entry to the palace. This red-sandstone building is still in an excellent condition and its beauty is enhanced by the calm waters of the lake.

Tourists from all over the world come to Jagmandir Palace to enjoy this marvelous beauty. Tourists can also have boat rides in the lake enjoying the reflections of the palace walls and domes of the palace in the water of Kishor Sagar Lake.