Kota is a very charismatic city popular for its palaces, forts and museums. Lakes and gardens are another striking features of the city which are distinguished and unbeatable from each other like Kesar Bagh. Kesar Bagh is one of the famous tourist attractions in Kota, which is preferred by tourists who wish to know about the royal past and history of the city. 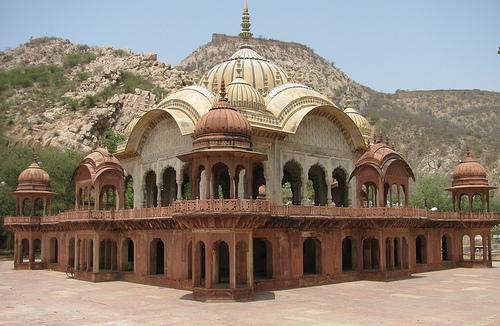 Kota Kesar Bagh offers its visitors an opportunity to watch some beautiful royal cenotaphs. Both international and domestic tourists visit this place round the year. These cenotaphs were put up by the erstwhile Bundi rulers. There are more than 65 empty tombs in Kesar Bagh which belongs to the Bundi rulers and their families and brave soldiers who had to sacrifice their life in order to protect their city. It is sure that you give salute to those brave hearts in whose memories these memorials were built, if you reach in front of these cenotaphs. No matter you are inclined towards history or not, Kesar Bagh will surely mesmerize you.

The typical structure of cenotaphs represents Mughal and Muslim architectural style. Most of the cenotaphs are constructed with white marbles and so they provide a magnificent view. You can see various motifs of local deities and different other animals such as cows, horses etc on the cenotaphs.

It was the Rajput warriors who protected their countrymen from the Mughal rulers, also built the cenotaphs. They are basically war time memorials but it also includes the cenotaphs of the royal family. The first cenotaph was constructed in 1581 while the last one was built in 1821.

You can also see some small eateries near Kesar Bagh where you can taste of the traditional food items of Rajasthan. Winter is the best season to visit Kesar Bagh, as the temperature will be low. You can take a stroll in the entire park in this time.