Kota, one of the famous cities in Rajasthan, has several tourist attractions including historical monuments, gardens, lakes, miscellaneous attractions, pilgrim destinations etc. Here describes some of the famous pilgrim spots in Kota that are visited by numerous people from all corners of the world every year. 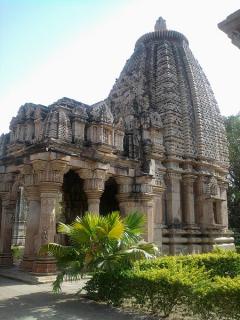 GaradiaMahadev Temple, which is situated at a distance of 45 km from Kota city, is located at the gorge of the Chambal River. The scenic location of Chambal River magnifies the beauty of this temple and the panoramic view of the Chambal gives it a calming effect. The clean and unspoiled environment of Garadia Mahadev Temple attracts many tourists to this pilgrim spot. People spend long hours here enjoying the cool breeze from the river.

The celebrations in Madhurdheesh Temple are strictly confined to the Vaishnav culture. This temple ranks first among the seven pithas of Vallabh Sect. Festive seasons are the best time to visit the templs, as people worship their deity with excess gaiety and fervor at this time.

Baroli Temples Complex
Baroli Temples Complex, which is also known as the Badoli temples, is situated in Baroli village of Kota district. The complex is situated near the rocky bank of the Chambal River, 45 kilometers south east of Kota. The temple complex is walled and contains eight temples with temple about 1 kilometer away. The complex, which is set around a natural fountain, positioned in two zones in the midst of a forest that contains kadamba, mango, peepal and jamun trees. It, built in the Pratihara style of temple architecture, dated to the 10th century AD. The entire temple complex is protected and conserved by the Archaeological Survey of India.

It is said that the Gujara-Pratihara Empire built Baroli temple in 10th-11th centuries. It is one of the earliest temple in Rajashtan. A carved stone image of the god Nataraja, which has been traced to a private collector in London, was stolen from Baroli temple complex in 1998. But, the statue has not been recovered so far.

Ganesha Temple
Ganesh temple, which is dedicated to Ganesh, the elephant-headed god of wisdom, dates back to the 10th century. The main temple structure is constructed with stones and the superstructure of the Shikara is built of brick. There is a projecting vestibule and an atiratha sanctum in the shrine.  The arms and feet of the Ganesha structure in the temple is found cut off. It may be due to the invasion of Islamic armies.

Gurudwara Azamgharh Sahib
Gurudwara Azamgarh Sahib in Kota is of great religious importance among the Sikhs. Some of Guru Nanak's belonging like a dagger and wooden chappals are believed to be kept here. Azamgharsh Sahib is also the birth place of the famous poet known as Ayodhya Singh ‘Harioodh’. As per the locals the gurudwara is also the burial ground of Sheikh Nizam-ud-Din, a famous Sufi saint. The gurudwara remains open from 5.00 am to 11.00 pm in all days of the week.