Kota, even though was a small village with forested landscape once, is one of the popular tourist attractions in Rajasthan now. It was after the Rajputs and princely rulers, the real transformation of Kota took place. There are many forts, palaces and gardens in Kota city that reflect the glory of the place. Taragarh Fort, which is built in 12th century by the founder of Kota Ajay Pal Chauhan, is one of the most magnificent of these monuments. 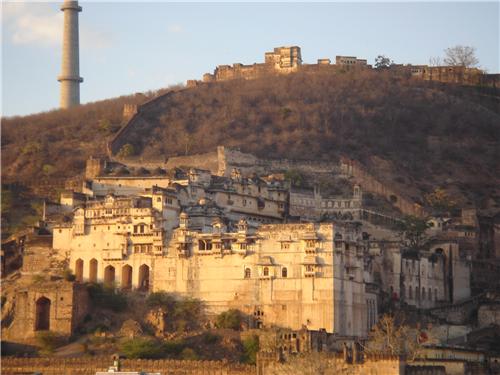 During its peak days, Taragarh fort was renowned for its tunnels that crisscross the entire hillside. The king and his deputies used to flee through these tunnels in case there was an imminent danger to their lives from enemies. But, the maps of these tunnels are not available now.

Attractions of Taragarh Fort
Taragarh Fort is situated 39 km away from the town centre and we can reach here by a sharply sloping road. The fort has three gateways which are called Gagudi ki Phatak,Lakshmi Pol and Phuta Darwaza respectively. There are some beautiful carvings of elephants in the main gateway, majority of which is still in ruins.

The Water Reservoirs
There are some huge water reservoirs in Taragarh Fort, which were built to store water and supply it to the people during the time of crisis. It provides water for the townfolk, who took shelter within the fort walls when on siege. The reservoirs here have been carved out of the rocky base of the fort.  It is said that the water in these reservoirs had the capacity to was away people residing below, if released in full force.

Garbha Gunjan and Bhim Burj
The huge and legendary cannon on the largest rampart of Taragarh Fort and it is called Garbha Gunjan and comes second to the largest cannon in the subcontinent. The cannon made such a thunderous sound that the soldiers had to run soon after firing it. You can see a massive stone tower within the fort complex that was buit to house the Garbha Gunjan. This tower is called Bhim Burj.

Rani Mahal
A small palace within the fort complex, which was built for the wives and concubines of rulers is called Rani Mahal. But it is sad to say that the shine of stained glass windows and the charm of spectacular murals in Rani Mahal have completely lost.

Legend
There is an interesting local belief related to Taragarh Fort. The people here believe that a huge fortune consisting of precious gold, rubies, diamonds and gems lies somewhere inside the Taragarh Fort. It is said that an Afgan family of warriors guarded the fortune inside the fort and even the King never had direct access to it. But the secret was lost forever with the death of last Pathan warrior during World War I. Some missions were launched to find the treasure by later rulers. But, all have been in vain.

Many tourists visit here to enjoy the spectacular views of the town from the fort during the wee hours and sunsets. Wandering around the ruins of these forts will really be an interesting experience.